What’s the Deal with Doodles? 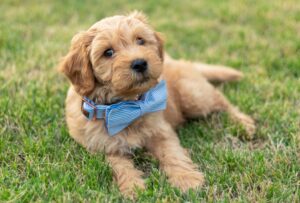 It seemed like in 2015 everyone and their mother were considering getting goldendoodle puppies. Now, all over Google there are searches like “Why are Goldendoodles the worst?” and “What’s wrong with Goldendoodles?”.

Two things are curious: how this trope got started, and what are the answers to these questions. Just keep reading to see the verdict!

First, let’s unpack what a Goldendoodle is – a mix of a Golden Retriever and Poodle; which are both respectively considered to be “pure” breeds.

A puppy in a litter from two dogs of the same breed, excluding any mixes in its entire lineage, is considered a purebred. Dogs of this nature are considered to look and act like all other dogs in that breed – which is why people tend to pay a pretty penny for them.

Dogs were originally bred for specific purposes. While there are still many lines of unbroken lineage, there are more dogs that are considered to be “mixes”. Any doodle is considered a mixed breed because its parents are one Poodle and one other breed (often a Golden Retriever or Labrador Retriever but can be others as well).

Best of Both Worlds?

One reason people are baffled by the behavior of a Doodle is because of their lack of knowledge about the parent breeds and/or lack of how the mix is inherently different from them. There are similarities of course, but a Goldendoodle is a completely separate kind of dog than either Goldens or Poodles and combines some of the best and worst traits of both.

I Think I’m Up to the Challenge – Is a Goldendoodle Right for Me?

The Standard size can be quite large (65-80lbs), incredibly smart, and can be stubborn. Depending if they are raised around kids or not, getting them to be friendly with little ones could pose an issue. They have boundless energy and are very goofy. They are also not immune to some of the health issues that impact both parent breeds.

It is a good idea to assume they will need 30-60 minutes of exercise daily as well as brain games to use that big noggin of theirs. If you can handle a long period of training in the beginning, commit to their exercise needs, and know they have the spirit of a puppy their whole lives, then they might be the right fit for you. For their high-strung so-called “faults”, we personally think they’re pretty great.

So, Are They the Worst?

Of course not! They are simply not for everyone. Their adorable looks and happy personality are enormous draws. However, they need tons (and we mean tons) of exercise and mental stimulation to expel all their energy.

Some official dog breeders were disheartened to see the rise of a mixed breed because intentionally creating a mix negates the original reason for the breed. Hence why “overpaying for a mutt” is sometimes thrown into conversation as a way of talking down to Doodle owners.

The idea of clinging to the old reasons for dog breeds is silly to other people. Although working breeds still do tons of work. Most family dogs have the enormously important task of denting the couch from hours of napping in one spot.

Consider your lifestyle. If you pair an avid hiker with a bulldog, we wouldn’t consider that a match made in heaven. Overall, they are a great fit for tons of homes but it is crucial to know what their traits are before embarking on a new life journey with a curly-haired cutie like this.