Dash In For Our Adorable Dachshund Puppies!

They’re long and strong and in your home is where they belong! 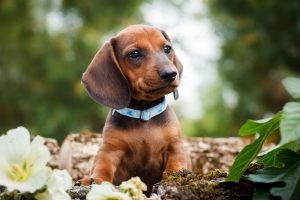 We’re talking about our dapper and dashing Dachshund puppies for sale. Forever, and we’re sure, for always they’ll be known as the “hot dog dog” especially those that are short-haired! They may be small but they’re feisty and fun. What they lack in size they more than make up for in personality and they’re high rankers in America as one of the most popular dogs! Take a look at some more information about our Dachshund puppies for sale.

These dogs are such fun and despite being so popular, they are still unique and turn heads all of the time! If you’re interested in learning more, come by store! Any of our locations will get you started.