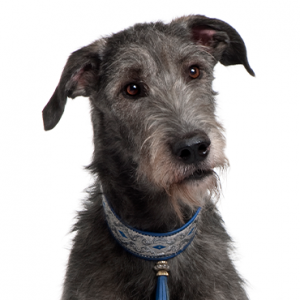 Resembling a larger, coated Greyhound, the Scottish Deerhound is a keen and alert sight hound, seen often in lure coursing events and the show ring. One of the oldest breeds, the Deerhound possesses a preeminent hunting ability. The hair on the body and neck is harsh and wiry, while the coat on the head, breast, and belly is much softer. Coat colors include blue-gray, gray, brindle, and black, among others.

Known centuries ago as the Scotch Greyhound, Rough Greyhound, and Highland Deerhound, the Scottish Deerhound became a clearly identified breed in the 16th and 17th centuries. He was the best breed to use for the pursuit and killing of deer, and at the time, could be owned by no one of rank lower than an earl. These exclusive ownership rules nearly led to the breed’s extinction until breeders revived the Deerhound in the early 1800s.

While he possesses a quiet and dignified personality in the home, the Scottish Deerhound may try to chase any furry animals that run past him. For that reason, the breed should be exercised on a leash or in a fenced area. Although he enjoys his family, his size may be intimidating to smaller children. The breed’s crisp, somewhat wiry coat, however, is exceptionally easy-care, requiring only brushing and occasional bathing.