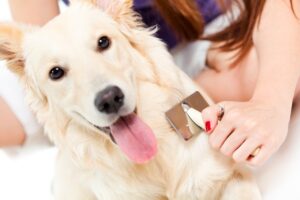 Grooming varies wildly based on the breed of dog you have. However, some practices are commonplace for all; like brushing their coat and making sure their nails are trimmed.

If you have your groomer in your favorites on your phone, don’t worry you’re not going to be coming for their job after reading our list but, you might be able to do more than muddle through until the next available appointment with the help of these tips.

Did you think all dogs liked to be brushed before you tried to brush your own? Yeah, us too. Some dogs do love being pampered but for others it’s worse than finding a pill in a slice of cheese.

One huge way to help your dog get accustomed to being brushed is by steadily introducing them to the process.

Have your dog sit and present them with the brush, let them smell it and feel it out. Then, use any word you’d like (for example, “Brush”) and hold it in front of their face for a few seconds before brushing them a couple of times and handing them a treat immediately after.

Giving them a few seconds to walk away is giving them the choice of staying there to endure the brushing and getting a reward after, or opting out and saying “this is too much for me”, at which point you can leave it and pick it up later.

Practicing this basic level of autonomy is good because it prevents dogs from getting overwhelmed and being stressed or aggressive because of their discomfort. With some training over time, they may even be able to sit for the length of the whole brushing without needing a treat until the end.

During the spring and summer months also be sure to check for ticks when brushing your pets – tick combs are great options to get the job done easily and help give you peace of mind that your dog’s flea and tick preventatives are working as they should.

Trimming your dog’s nails could be considered an Olympic sport if you ask us. From running around, to couch-wrestling, just to get one millimeter off of one toe? So frustrating.

One of the biggest deterrents for dog parents to clipping their pup’s nails is because they worry they will hit the quick (the sensitive nail-bed dogs have) and stress their dog out and leave them with a cut.

A great trick for this is to actually hold your dog’s paw backwards, so it points behind them as if they’re taking a step, and from that angle, only cut the tip of the nail that is below the paw pad.

This will likely not get the nails as short as absolutely possible but will ensure you don’t hit the quick and it applies to clear and black nails.

Having a well-groomed dog is essential for their comfort. It’s also a sign of a well taken care of pet and makes for a happier one!