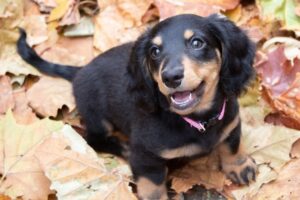 Ever wonder why your dog is so hyper-focused on something? Birds, digging, running – whatever their fixation, there is a good chance it stems from their breeding. Here’s a look at some of the origins of the most popular dog breeds today.

Labradoodles are one example of a “doodle” mix. Created by a combination of a Poodle and Labrador Retriever, these friendly and energetic breeds have lots of desirable traits. Some challenges they may bring to the family are going after birds and seeking out bodies of water for a swim. This is because of their ancestry! Poodles were originally bred as hunting companions to flush out birds from the fields. Labradors are also considered hunting dogs but descended from St. John’s water dogs – a breed that specifically aided fishermen; part of why the modern day Lab still has webbed feet!

Why are they depicted as Nannies?

These goofy, intelligent, and family-centric dogs have a less-than fuzzy origin story. Descendants of fighting dogs in Tibet, they were brought into help the military in WWI; serving as guard dogs, messengers, carriers, and attack dogs. After WWII, they were officially welcomed into tons of American homes as pets through the admiration they had gained in the wars. Today they are still accepted as one of the smartest and highest-energy breeds as well as being a fantastic family guard dog. They may bark at new people but this goes along with their inherited need to protect.

French Bulldogs unsurprisingly descended from the original British Bulldog; the origins of which were to bait bulls in the 19th century. Once bull-baiting was no longer allowed, people still loved the breed and its popularity continued to rise. Through different generations of breeding, they became smaller and eventually differentiated an entire breed to the “French Bulldog” popularized in Paris in the late 1800s.

In present day America, Frenchies are one of the most popular breeds! A far cry from their original bull-baiting days, they are now stylish, pint-sized, and a wonderful cuddly companion. Without a technical “job”, they became more strictly considered to be house pets and therefore earn their rightful place indenting couches all over the continental US (and much of Europe).

One of the most popular American dog breeds is originally from Ireland; however, its roots began with the Spanish Pointer, large Water Spaniel, and Spring Spaniel according to the AKC. Loving and fast, these gorgeous pups are known to be wonderful family dogs. They are also the second-smallest and newest of the Setter varieties. They are extremely quick and respond well to positive reinforcement while training, making them tireless tennis-ball fetchers.

Can Someone Explain the Burrowing?

Stubborn and agile, these feisty dogs were originally bred for badger hunting. They had to be independent thinkers and extremely courageous. This is one of the breeds that has had various sizes and coats of its descendants occur but remains the same in temperament and stature as its original ancestors. As they had to dig through tunnels while hunting, the desire to burrow under blankets and pillows is one of their remnants of their early ancestry.

These components are important to consider before purchasing or adopting a dog; but can also help understand some of the tricky behaviors we experience from mixes and “mutts” who we may not know the official lineage of. When we take into consideration the history of these breeds it is easier to understand their gravitation toward certain activities. Ideally, your lifestyle and needs of your dog align but if they’re slightly off-center, that’s okay – just make sure to make time for the things they love to do, too!