The Bernese Mountain dog is a large sized breed dog!

Weighing up to 120 pounds, they are strong, gentle giants with calm temperaments. Though they were bred to be working dogs, they are consistently working the hearts of dog owners around the world. Read on to learn more fun facts about these big beauties. 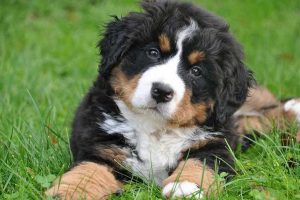 The Bernese Mountain dog loves to make their owners happy and laugh. They will find a specific antic or action to make them laugh and will stick to it, repeating it over and over again! I guess you can say their people pleasers, too!

They come from Switzerland.

The Bernese Mountain Dog, is affectionately called the Berner.  The name refers to his Swiss homeland. The Berner was originally an essential part of farm life. They drove cattle, protected the family, and would pull loaded carts to nearby villages.

The Bernese Mountain dog became extinct in the early 20th century, when more modern and expedient means of transportation became accessible to farmers. In 1968, the Bernese Mountain Dog Club of America was founded, with 62 members and 43 registered Berners.

The Berner is a type of Swiss mountain dog.

Swiss mountain dogs, or Sennenhund, are large working dogs that originated in the Swiss Alps. They are widely known for their tri-colors, calm temperaments, and stocky figures. In addition to the Bernese Mountain dog, the others are the Appenzeller, Entlebucher mountain dog, and Greater Swiss mountain dog. They all look pretty closely, but the Berner is the only one with long flowing fur.

They are incredibly strong!

These dogs are muscular, under all of their lovely fur. They are able to haul up to 1000 pounds! That’s approximately 10 times their own weight!

Despite their phenomenal physical strength, they are slow learners. Bernese Mountain dogs mature a bit slower than other dogs, so they require consistent and patient training.

Back in 1850, when cheese plants started to open up and producers wanted to move large shipments of food and who could they depend on to get the job done – the Bernese Mountain dog! They would effortlessly pull the carts that were filled with dairy products and breads all over to different farms. Eventually, word spread about draft dogs and other countries like France, Belgium, the Netherlands, and Canada were using the dog-carts.